When You Run Into Martin Sheen – Will You Be Ready?

Long ago when I worked for a big tech company I spent a great deal of time traveling in big city airports around North America, often with my boss, and often we ran into celebrities.

My boss, who I’ll call Phil, was a huge Apocalypse Now fan, as am I. Phil would often tell me of his hero – lead actor in the movie Martin Sheen – and all the things he would say to Mr. Sheen should they ever meet. How much he loved the movie, how Sheen’s role inspired him given he had a heart attack and almost died making the film and was found lying in ditch but still managed to recover to finish the movie, how Phil had followed every step in his career for over 20 years.

Suffice to say it was a bro-mance, a male love affair that was probably never going to see the light of day.

One night in early 2000 as Phil and I dropped off our rental car at the Vancouver airport and we trudged into the terminal to catch a late flight. We were tired, hungry and a little pissed off at a bad meeting we had been a part of earlier in the day. As we approached the door I noticed a well dressed gentleman heading our way and I knew right away who it was. It was unmistakable, and I immediately leaned over to Phil and whispered “Phil…..it’s Martin Freakin Sheen……”

Phil was stunned and he knew I was right. As his pace slowed and we got closer to Martin (to confirm it was in fact him) Phil stopped, face beet red, heart pounding and palms sweaty. He looked Sheen dead in the eye as they both stopped in greeting and stuttered…..

That was it. The moment was over. Phil was in fact speechless … all Sheen could awkwardly reply was…“umm Thanks” as he move quickly along to get his rental car.

Phil was devastated. He had missed his one chance to have a private face to face conversation with and idol. Instead, all he got a was a quick and embarrassing pass-by.

In the years since I’ve thought a lot about that chance encounter, especially how it related to meeting that “big lead” that I or others like me were trying to land. Chance encounters happen a lot more than we think, especially in the business world where as we all know –  industries – no matter what industry it is, are very very small. So we should plan for chance encounters – in fact: be as prepared as a Navy Seal would be if they were about to jump from a helicopter into enemy territory. 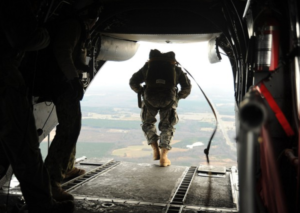 Phil’s reaction on meeting his idol was actually quite predictable, and it’s one I’m sure everyone has experienced at one time.

The – Oh, My, God, what do I say now without sounding like an idiot, (that actually makes us sound and feel just like an idiot).

All of preparation we should have done, the research we wished we had acquired, and the questions we should have ready to ask but don’t create a stress in us that changes us physically and effect our physiology. It make us bumbling idiots.

One of the things I have done to effectively combat this problem is to follow these three simple steps:

The big thing to remember here is:

Doubt Kills More Dreams Than Failure
and doubt comes from being unprepared.

Create some opportunity one sheets and have them ready for those “unexpected” encounters you expect to have.